Google Plus: Side commentary on obsolete networks

This is a bit off-topic for some of my non-profit readers, but for the geeks in the crowd I’m sure by now it’s been hammered home: It’s Google+ week. (For general info on Google+, see recommended sources at end of post, or click image at left.)

This morning I read She Said / He Said posts by Shelby Sapusek and Jim Raffel considering “What social media network will become obsolete first?” Good question. I started to comment on Jim’s post, but into paragraph six decided to upgrade to a blog post. 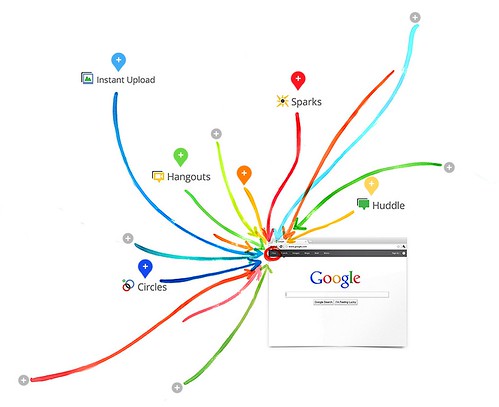 In her post, Shelby notes that even the “obsolete” networks aren’t really obsolete. While Google+ could go in any number of directions, I don’t know that it could push anybody out entirely – although as you’ll read below, I hope the folks at LinkedIn are doing some serious brainstorming.

I think Google+ has the potential to become a multipurpose personal and business networking channel. Facebook doesn’t easily lend itself to business networking any more than LinkedIn suits personal interactions. Also, people tend to have more trust in Google when it comes to personal information; another big privacy misstep from Facebook, with a viable alternative in the wings, could be a game changer.

If Google+ can get to a critical mass – which is still a big question – I’m inclined to think that other networks will focus more on their strengths rather than play catch-up.

I think there are two main Facebook camps – people who are there for their friends, and those who are there for the games. Obviously there’s overlap but, as someone who avoids games, if my core group of friends moves to Google+, Facebook won’t hold a lot of relevance to me (although I would not likely delete my account).

However, more than half of Facebook users play games, and I don’t see any motivation for those folks to leave.

Organizations and businesses are on Facebook because people are there; I doubt anyone has joined just to connect with their favourite brand(s). I think it’s too early to predict how this will unfold, but I look forward to the business profiles that Google+ plans to launch later this year.

Nonprofits in particular have felt the impact of recent changes to Facebook Groups; for some, Groups functioned much more effectively than Facebook Pages do. If Google+ gave organizations the ability to create their own Circles (an easy way to group contacts), for example, that feature alone would be a very strong argument in its favour.

However, people who use Google Reader probably know that there’s an expanded view, which includes images, and list view, which is a simple headline-and-summary format. If this option was added to the Google+ newsfeed, my opinion could change pretty quickly!

LinkedIn has always struggled to find its groove, and I think it likely has the most to lose of the major social networks. With a few tweaks, Google+ has the potential to match much of LinkedIn’s functionality – and surpass it.

MySpace, Flickr, Quora, Foursquare, Gowalla… They’re not in direct competition, and my guess is that they’re focused enough not to feel too much of a change for now.

Whatever changes happen, they’re not likely to happen soon. And who knows – something entirely different might be hovering just out of sight.

There have been some great posts about Google+, here are a couple of my favourites:

Both Chris and Beth have been doing quite a bit of experimentation on Google+ so you’ll find a lot of other interesting info on their blogs. Christopher S Penn has also been posting a ton of interesting stuff to his Google+ account: cspenn.com/g.