RSS Graffiti and I met on someone else’s Facebook Page. It wasn’t love at first sight; I’m not a fan of cross-posting and I was wary about just how useful this Facebook app could be.  But – isn’t there always a “but”? – it offers a simple way to curate information from multiple sources and allows users to set quite a few parameters/filters for cross-posting tweets, blog posts, and other things that can be collected using RSS feeds.

Cross-posting is the well-intentioned idea that you can streamline your online activites by getting things to automatically re-post on other sites. For example, your Tweets will automatically re-post to your LinkedIn status, or your blog posts will automatically be distributed via Twitter when you hit “Publish”.
It’s an ongoing debate that my friend Donna Papacosta blogged about recently. The bottom line, in my opinion: It’s confusing.
If you’re a LinkedIn user who hasn’t ventured onto Twitter yet, what would this mean to you?

As a tweet, there’s absolutely nothing wrong with it. But if you’re not tweet-oriented, it’s just noise in your LinkedIn newsfeed.

Why I gave cross-posting a good run…

Cross-posting is tempting because it seems a more efficient solution. And who doesn’t like efficiency?
I actively use a lot of different platforms (incl Twitter, Tumblr, Facebook, LinkedIn, this blog). Funneling them into one decent-looking app that would selectively cross-post to my Facebook Page was one of the better options I’d seen.

…And why I turned it off

RSS Graffiti and I had our quarrels from our first weekend together, when I deleted everything that was cross-posted because I felt the information looked out of context.
I was annoyed enough that I did a quick poll with my fledgling group of Facebook Likers, and was surprised to learn that nobody else found the cross-posts annoying! So I tweaked the parameters again and let RSS Graffitti continue on its merry little way. Path of least resistance, I suppose.
When I recently decided, again, to delete a post from RSS Graffiti and to re-post the information – see the comparison below, both point to the same link – I decided that I was spending just as much time reviewing what had been posted as I would if I simply posted the things I found interesting. 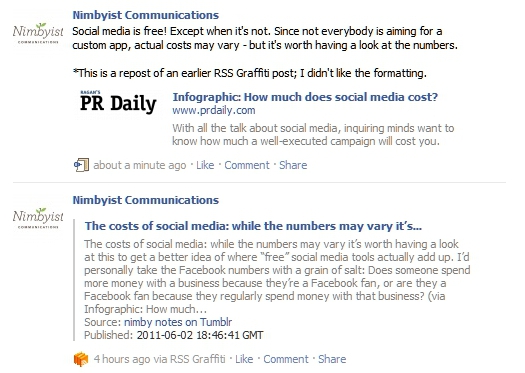 Social media is all about trying new things, and as much as I’ve been anti-cross-posting I’m not against changing my mind if something comes along that fits my needs.
Unfortunately, RSS Graffiti is not it.  This has been a good reminder that:

What’s your experience with cross-posting? Any tools that you’ve found helpful?